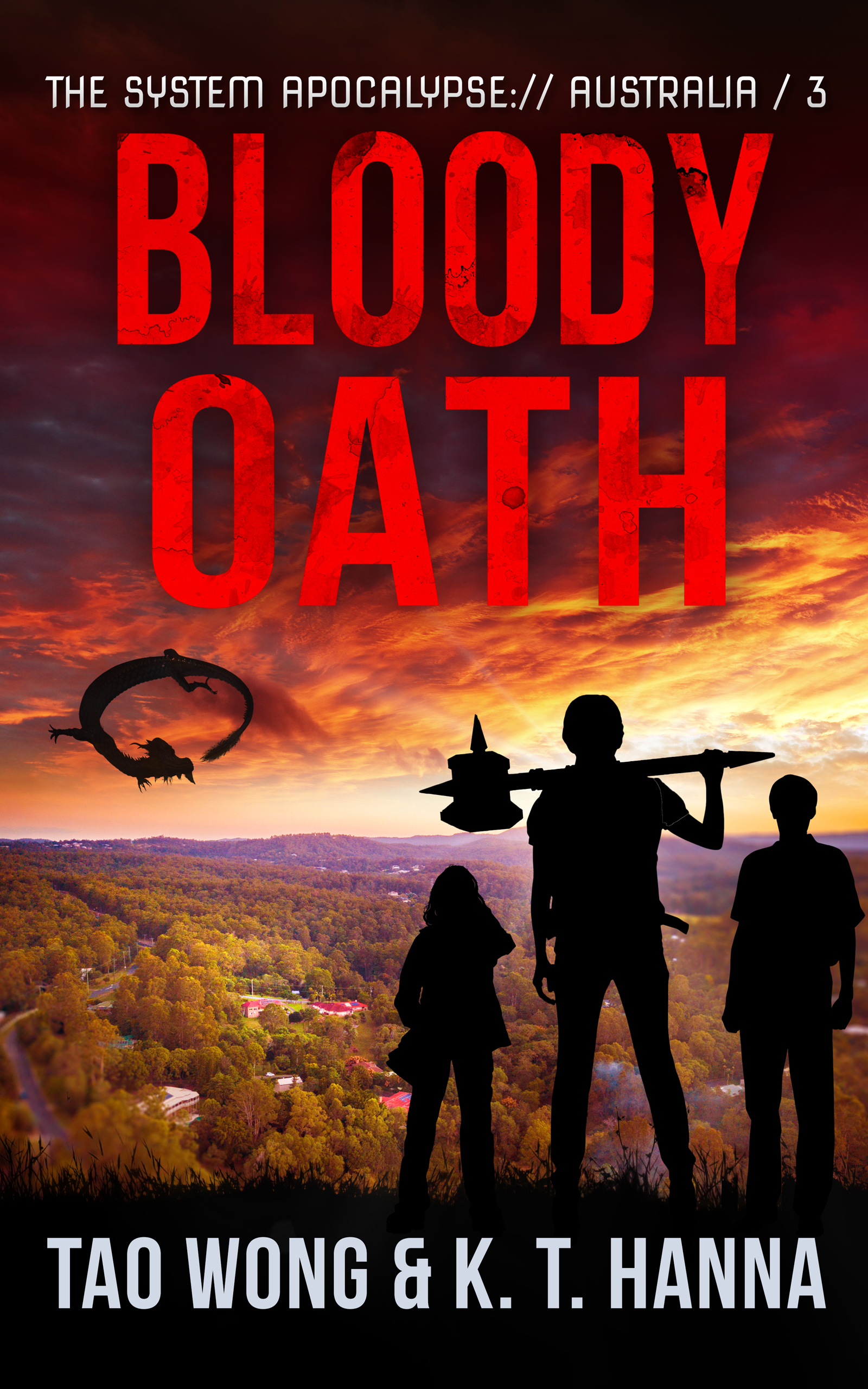 Aliens and monsters and Australia: Oh My!

Kira’s worries are only just beginning. She has a newly minted alien alliance to nurture, a settlement to run, and Skills to master, all while wrangling her children in an apocalypse.

Hemmed in by continually respawning mutations, the settlement threatens to outgrow its borders, pushing their safe zone into monster-held territory. They can’t stop growing and Leveling, but neither will the monsters.

Pushed to the breaking point; Kira, the settlement, and their allies face their greatest challenge yet – waves of high-level monsters that threaten everything she holds dear.

Bloody Oath is the third book in The System Apocalypse: Australia series. Set in the same universe as Tao Wong’s the System Apocalypse, it’s focusing on the changes in the deadliest of continents, Australia. Fans of the original series, LitRPG, fantasy, science-fiction and post-apocalyptic novels will want to take a look.

Parenting in the apocalypse is the worst

Two weeks into the System Apocalypse and the transformations are just beginning. Mutated insects, carnivorous toads and angry drop bears were not on the school curriculum; but when the apocalypse hits, you roll with it. Parenting a teenager has prepared Kira for the worst, she just didn’t expect that to include the end of the world.

A menacing conglomerate of alien hunters is breathing down their necks and new threats lurk just over the hills. Kira and the rest of the Australian survivors of Brisbane must Level up, bolster defenses, and prepare for an incoming invasion none of them foresaw.

In-between all that, she’ll need to keep her family intact and functioning. All in a day’s work for a single mum, really.

Flat Out is the second book in The System Apocalypse: Australia series. Set in the same universe as Tao Wong’s the System Apocalypse, it’s focusing on the changes in the deadliest of continents, Australia. Fans of the original series, LitRPG, fantasy, science-fiction and post-apocalyptic novels will want to take a look. 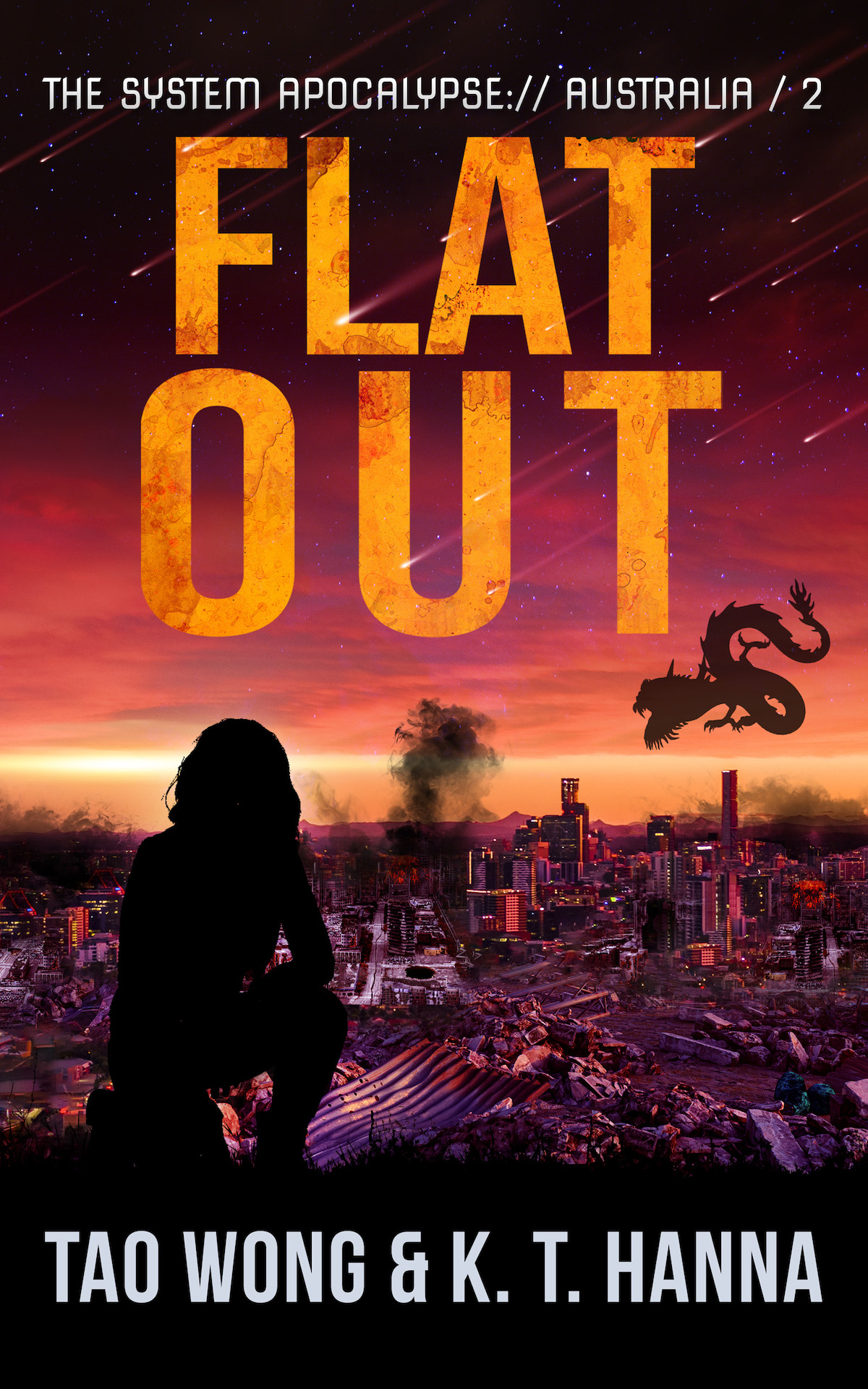 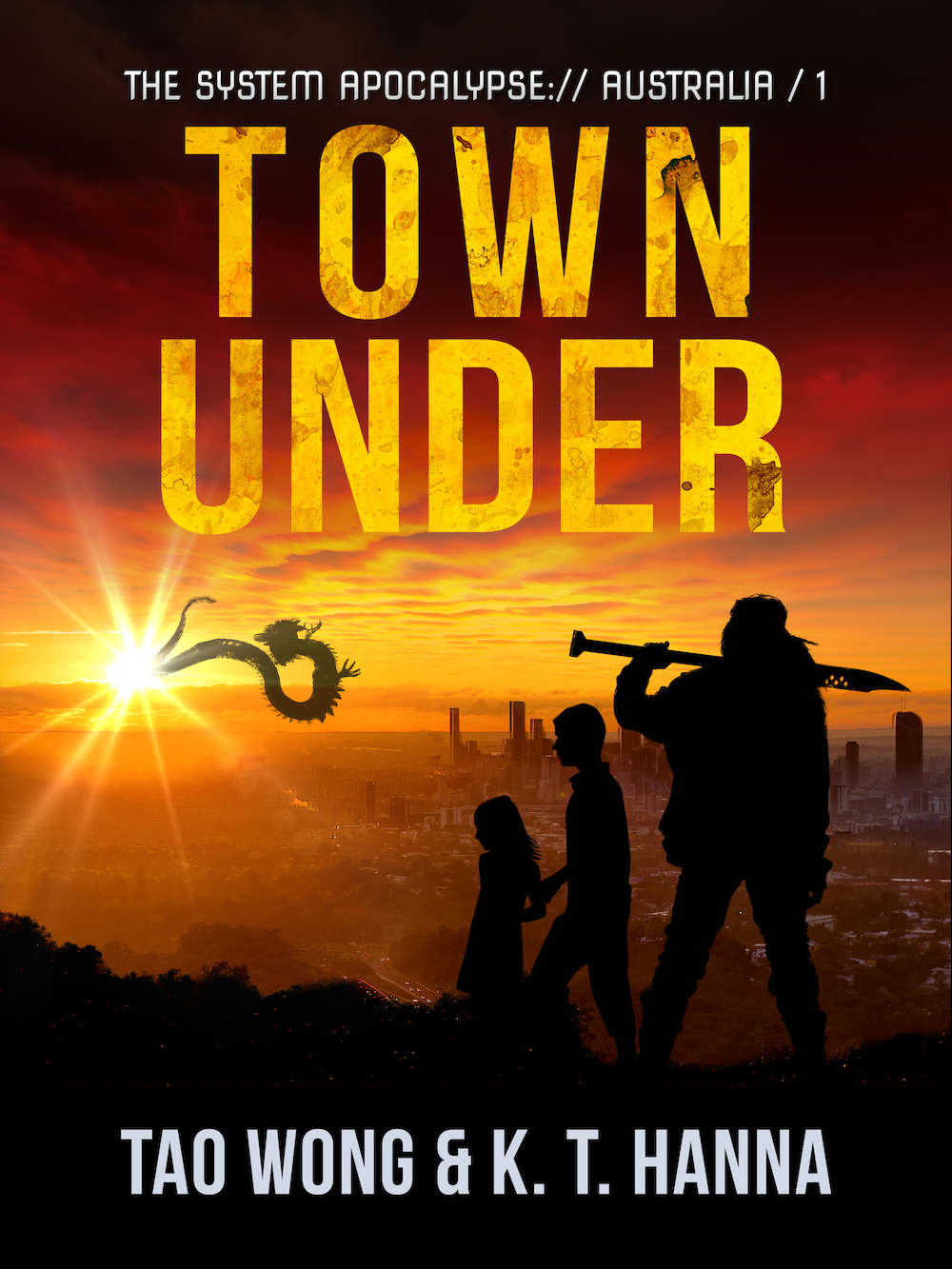 The System Apocalypse: Australia – Book One

The System Apocalypse has come to Australia, altering native organisms and importing even more menacing creatures to the most dangerous continent on Earth. For Kira Kent, plant biologist, the System arrives while she’s pulling an all nighter at work with her pair of kids in tow.

Now, instead of mundane parental concerns like childcare and paying the bills, she’s got to figure out how to survive a world where already deadly flora and fauna have grown even more perilous – all while dealing with the minutiae of the System’s pesky blue screens and Levels and somehow putting together a community of survivors to forge a safe zone to shelter her son and daughter.

It almost makes her miss the PTA fundraising sales. Almost.

Town Under is the first book in a new series, The System Apocalypse: Australia. It’s set in the same universe as Tao Wong’s The System Apocalypse and starts in the same time period as Life in the North but focuses on the changes in the deadliest of continents, Australia. Fans of the original series, LitRPG, fantasy, science-fiction and post-apocalyptic novels will want to take a look.

Murmur and Fable are left reeling after Somnia’s servers crash, and nothing is quite the same. Even as they challenge new dungeons, Murmur is haunted by an old enemy who seeks to take her down a dark path.

Well, she’s not dead. That’s better than Murmur expected. But after Telvar cast her out of the game with all her strings attached, Murmur has more than in-game death to deal with. When some of the abilities of Somnia remain with her, Murmur must figure out where she ends and the game begins.

The Final Dungeon will test them.With Somnia coming apart at the seams as the virus rampages, Murmur desperately plunges through the portal to save Sinister, Fable close behind.
James’ entrance into the game has added yet another problem for the development team. Meanwhile, Jirald takes his vendetta to the next level, doing everything he can to sabotage the raid.
Allies and friends clash as uncertainty hangs over access to the final dungeon. The virus has figured out how to access some headsets, risking potentially millions of lives. AIs and Somnia evolve further, but taking their own fate into their hands is harder than anticipated
With everything on the line, they only have one chance to succeed.
Wipe, and everything dies with them. 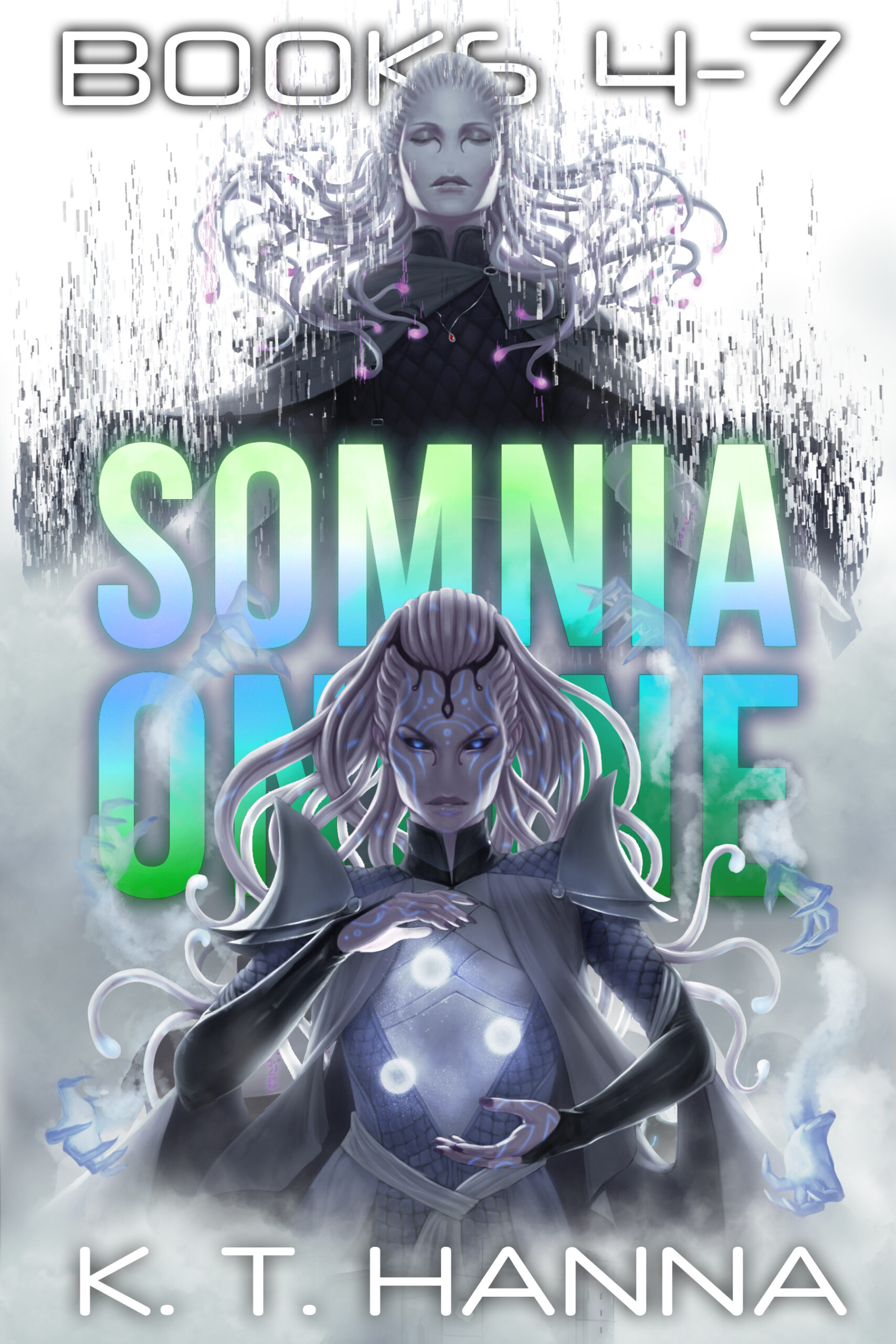 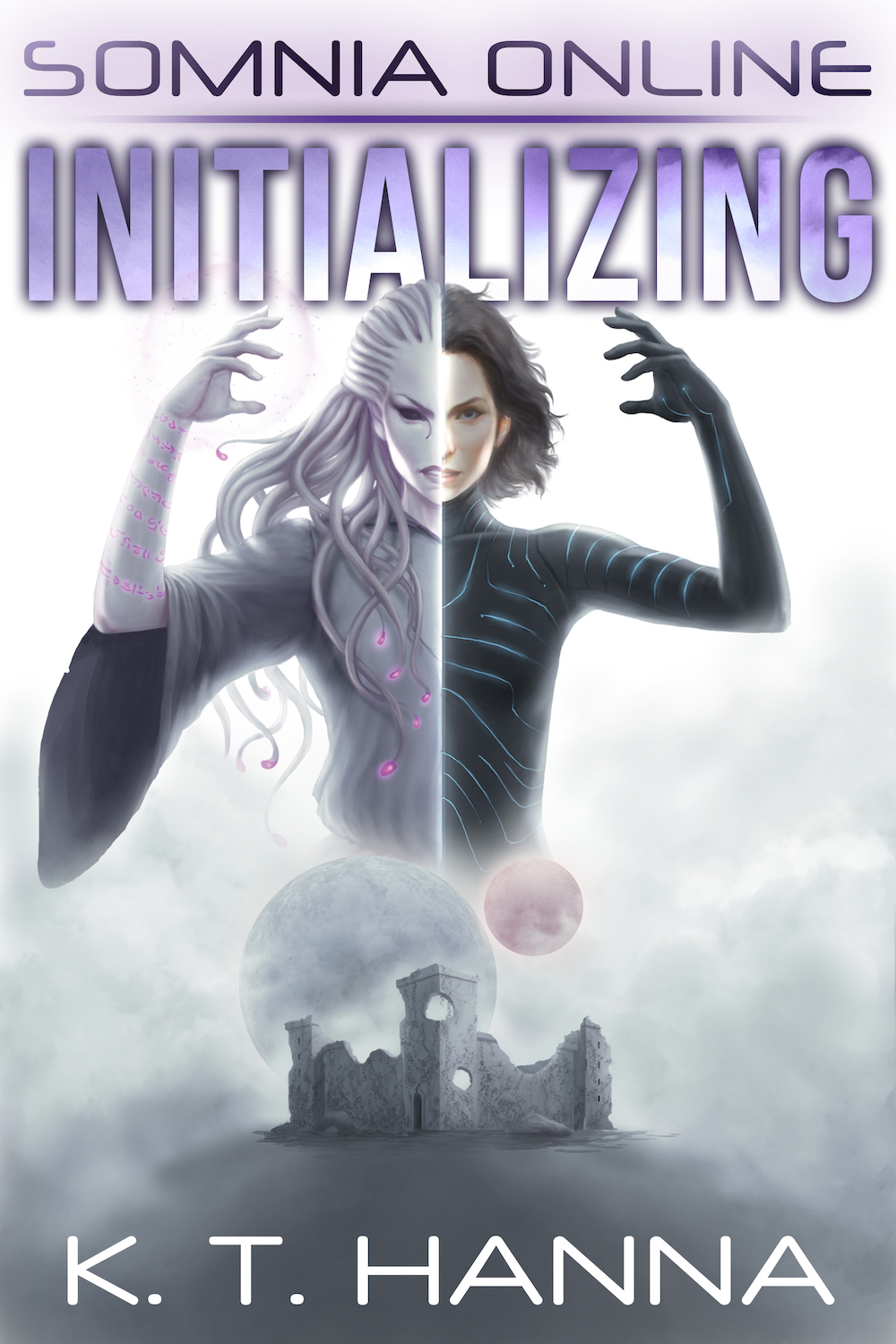 Discover the class you were born to play.

Wren, a seasoned healer, is dismayed when Somnia Online automatically assigns her character, Murmur, to the Enchanter class. Determined to overcome the unexpected setback, she assembles her guild, intent on the coveted #1 spot. Twelve keys stand between her and victory, but finding them is only part of the puzzle.

Armed with telepathic abilities, Murmur rises to the challenge. However, old rivals have followed her to Somnia Online desperate for revenge. Intricate quest lines become more dangerous as NPCs absorb powerful artifacts, and Murmur begins to wonder just what sort of AI controls the world.

Murmur questions her sanity as the real and virtual worlds mesh together. Everyone is keeping secrets from her, even the AI, and Murmur’s determined to uncover them. 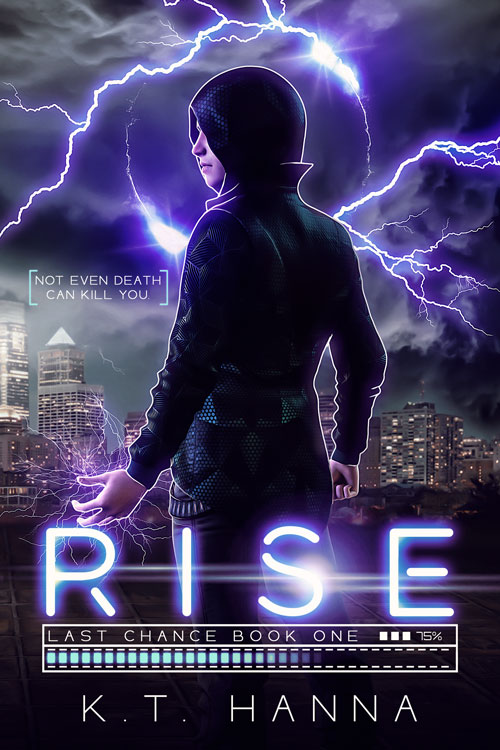 Death is inevitable… Unless the Second Chance (SC) program recruits your particular super power. One last chance at life, in exchange for unquestioning completion of tasks set by the system that brought you back.

At first, Dare’s assignments seem trivial, inconsequential even. But as the missions progress, they produce more questions and no answers. Unexpected assailants, inexplicable tasks, and too many people Dare knows already in the system. Dare’s never believed in coincidences.

SC’s motives are unclear. Questions aren’t tolerated. Punishment is meted out arbitrarily. And SC can terminate the contract, and all participants lives with it, at any point in time.

Dare’s only chance is to figure out how to fight back without being deleted in the process. 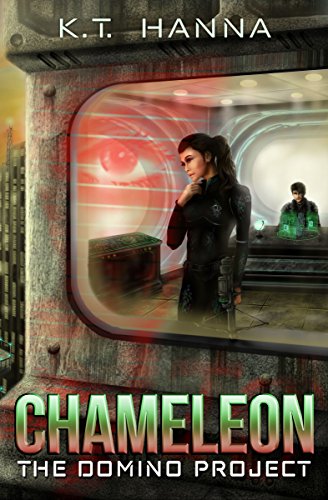 When Sai’s newly awoken psionic powers accidentally destroy her apartment complex, she’s thrown into an intensive training program. Her only options are pass or die.

Surviving means proving her continued existence isn’t a mistake–a task her new mentor, Bastian, takes personally. Her abilities place her in the GNW Enforcer division, and partners her with Domino 12, who is eerily human for an alien-parasite psionic hybrid.

After eliminating an Exiled scientist, she discovers someone is manipulating both sides of the conflict. With each mission more perilous, Sai must figure out who to trust before her next assignment becomes her last.

Read More
Find me on Amazon!
{